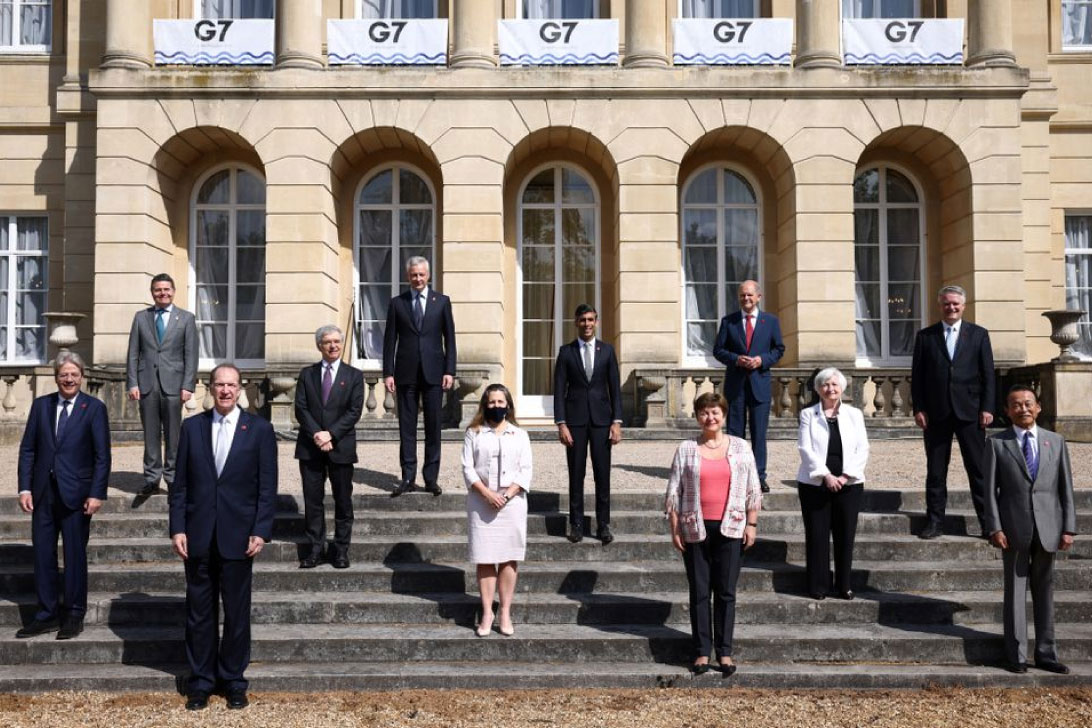 Momentum has grown behind the US-led plans to limit the ability of multinationals such as tech giants to game the tax system to boost profits, especially at a time when economies around the world are reeling from the impact of the coronavirus outbreak

Finance ministers from wealthy G7 nations on Saturday, 5th of June 2021, endorsed a global minimum corporate tax rate of at least 15 percent, rallying behind a US-backed plan targeting tech giants and other multinationals accused of not paying enough.

Following the two-day gathering in London, the G7 said in a final communique that it will “commit to a global minimum tax of at least 15 percent on a country by country basis”.

The G7 — comprising Britain, Canada, France, Germany, Italy, Japan and the United States — said it hoped to reach a final tax agreement at the July gathering of the expanded G20 finance ministers’ group.

The G7 also committed to making companies carry out mandatory reporting regarding the climate impact of their investments.

It additionally said it will continue to support “the poorest and most vulnerable countries as they address health and economic challenges associated with COVID-19 “.

Regarding the commitment on taxation, Britain’s Treasury noted that “the largest and most profitable multinationals will be required to pay tax in the countries where they operate — and not just where they have their headquarters”.

The landmark move comes as governments seek to repair finances battered during the pandemic by slashed tax receipts plus vast spending and borrowing.

The London gathering has also prepared the ground for a summit of G7 leaders in Cornwall, southwest England, starting Friday, and which Biden is set to attend.

Momentum has grown behind the US-led plans to limit the ability of multinationals such as tech giants to game the tax system to boost profits, especially at a time when economies around the world are reeling from the impact of the coronavirus outbreak.

Biden had called for a unified minimum corporate tax rate of 15 percent in negotiations with the Organization for Economic Co-operation and Development and G20.

Proponents argue that a minimum tax is necessary to stem competition between countries over who can offer multinationals the lowest rate.

They say that a “race to the bottom” saps precious revenues that could go to government priorities like hospitals and schools.

The application of a minimum global corporate tax rate of 15% will definitely affect the Cypriot economy. However, this effect may not be purely negative

For Cyprus it means that there will be a forced increase of 2.5% in its existing tax rate for foreign companies and from the current 12.5% ​​it will go to 15%.

It is certain that this development will have some negative consequences for Cyprus and its economy in terms of movements attracting foreign companies, said the professor of economics at the University of Cyprus Marios Zachariadis. As Mr. Zachariadis pointed out, the “impact will not be” huge “” if the minimum global tax rate reaches up to 15%. However, as he pointed out, there are intense and serious pressures for this rate to be higher than 15%. So, if things develop in such a direction, it would be much more negative for the Cypriot economy.

In the long run, this development is also an opportunity for them to evolve, noted Mr. Zachariadis. There are already some comparative advantages in Cyprus and “it is pointed out that the accounting and other services we offer in Cyprus are of a relatively high standard and good”. If these service companies manage to remain efficient and improve their labor costs, a long-term blow to Cyprus will not necessarily be recorded.

With this development also, the need for rapid reforms that need to be made and will make Cyprus more competitive is even more urgent.

Given that the implementation of the minimum tax rate will be supported by all powerful European countries, there does not seem to be any way for Cyprus to be able to resist this decision. Although it may not be forced to implement such a “directive”, Cyprus or any other EU country is “politically forced” due to the enormous pressure that will exist.

Tax harmonization between European States is something that can bring significant benefits more broadly. “It is in this way that the citizens and politicians of the powerful EU states can be persuaded of a federal approach to the European economy, through which they will spend where needed funds, rather than borrow as they do today.”

For something like this to happen, a guarantee is needed, which is found in tax harmonization, according to Mr. Zachariadis. “It is a guarantee that the Eurozone will become a federation. When there is a recession in a member of the Union, to be able to strengthen it without being burdened with loans, as was done, for example, in the case of Greece “.

It is noted that the G7 decision will not be implemented immediately, but it must first go through some stages and get the “green light” in each of them.

The G7 decision will be discussed next month and the G20, the 20 most economically powerful countries in the world, will consult with each other. Consultations will also take place at OECD level. Apart from the individual EU Member States, the EU will also take part in these consultations.

Following the first briefing and negotiation meetings, the agreement could be signed at a meeting of G20 finance ministers next October and then put into effect.