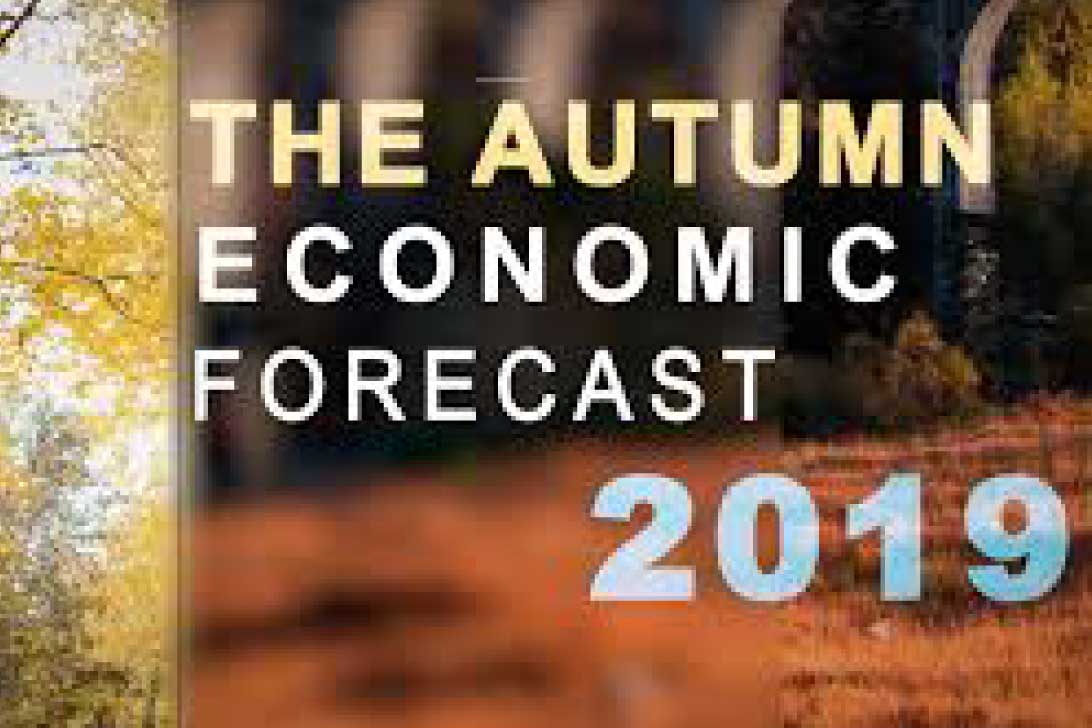 The European economy is now in its seventh consecutive year of growth and is forecast to continue expanding in 2020 and 2021. Labor markets remain strong and unemployment continues to fall. However, the external environment becomes much less supportive and uncertainty is running high. As a result, the European economy looks to be heading towards a protracted period of more subdued growth and muted inflation.

The EU economy is facing a combination of shocks whose impact is cushioned by the strength of its labor marketbut uncertainty and structural shifts should keep GDP growth subdued.As global growth is hurt by escalating economic conflict and lingering uncertaintyit is expected to remain subduedand less tradeintensive.

Concerns about the global outlook have driven bond yields lower and a large part of European sovereign bonds are traded at negative yields while the euro exchange rate has been broadly stableand net lending has expanded further.Member States set to converge towards weaker outcomesbut private consumption should hold up wellwhile investment is more hard hitand the contribution of net exports to growth should only return to neutral next year.

Employment gains are set to slow downwhile inflation is expected to remain low for longer.

Risks to economic growth are tilted to the downside.

The Commission publishes a full set of macroeconomic forecasts for the EU and its Member states in spring (May) and autumn (November) and publishes interim forecasts updating GDP and inflation figures in winter (February) and summer (July). These forecasts are produced by the Directorate-General for Economic and Financial Affairs (DG ECFIN)

Cyprus’ economic expansion remains strong but is set to gradually moderate, mainly due to external headwinds. Domestic demand is projected to stay the main driver of growth, supported by private consumption and an improving labor market. Meanwhile inflation should remain subdued. The general government budget is expected to remain in surplus and public debt to steadily decline from 2019 onwards. Risks to the fiscal outlook are also mainly on the downside.

Growth slows amid external headwinds after reaching 4.1% in 2018, real GDP growth slowed down in the first half of this year. The weakness came mainly from the external environment, while domestic demand held up well. External headwinds are expected to continue, leading to more moderate growth over the forecast horizon, which is projected at 2.9% this year, 2.6% in 2020 and 2.3% in 2021.

Private consumption should continue to provide strong support for growth as real disposable income continues to rise. The unemployment rate fell in 2019, standing at 6.8% in August. Meanwhile, wages in the private sector have risen only moderately. This was attributable to continued presence of slack in the labor market despite high employment rates in certain sectors, such as construction and tourism. Public sector wages, however, have increased much more prominently, notably reflecting increases in the wage bill for health care providers (with the launch of the national health system) and the gradual phasing out of wage cuts implemented during the crisis. These developments are likely to provide solid support for both private and public consumption.

Investment in 2019 has been strong, particularly in construction. This sector has benefitted largely from the Citizenship by Investment scheme, which has brought in substantial foreign direct investment (FDI), concentrated in the real estate sector. The tighter requirements of the Scheme caused a frontloading of applications, thus also FDI in the first half of the year before their entry into force; hence, a deceleration in the second half of the year is expected.

Net exports were negative in the first half of 2019 and are expected to continue to weigh on growth. Tourism, a flagship industry and major exporter of services, saw a fall in revenues, driven by several factors. First, tourists from the UK – the most important tourism market for Cyprus – suffered from the depreciation of the pound sterling versus the euro. Second, competition from cheaper neighboring destinations led to a decline in Russian tourist arrivals (the second largest market). Finally, the persisting air access problems led to a contraction of German arrivals by nearly one fifth. Imports, meanwhile, are set to increase alongside strong domestic demand.

Looking forward, some of the above factors are set to continue, while slowing global demand coupled with the bankruptcy of the travel company Thomas Cook may further compound the situation in the tourism sector. Furthermore, the economy’s reliance on foreign funding leaves it heavily exposed to adverse external developments.

Inflation remains subdued and is expected to average 0.6% in 2019 and 0.7% in 2020 and rise to 1.3% in 2021. Inflationary pressures stem mainly from services and unprocessed food categories. Energy inflation is on a declining path following a period of significant increases. Core inflation remains subdued, albeit increasing reflecting overall moderate wage growth. Over the forecast horizon, inflation is expected to remain low due to the continued presence of slack in the labor market and the currently low oil price, which should lead to lower energy prices.

Public finances are back to budgetary surpluses.

The general government headline balance is expected to record a hefty surplus of around 3.7% of GDP in 2019, after a temporary deficit of 4.4% of GDP in 2018 that was due to the one-off support measures related to the Cyprus Cooperative Bank sale. Cyprus’ fiscal performance is projected to remain strong, on the back of a still relatively strong GDP growth and improving labor market. After an expected surplus of 3.7% of GDP in 2019, the general government surplus is expected to decrease to 2.6% in 2020 and 2.4% in 2021.

Government revenue is forecast to increase strongly in 2019 and in the next two years driven by strong tax collection and by a sizable rise in social security contributions due to higher contribution rates and to the introduction of the National Health Insurance System (NHIS). However, rising revenues will be more than offset by higher expenditure growth in 2020 and 2021. This is mostly due to the gradual reversal of wage cuts implemented during the crisis, the introduction of the Estia scheme to support nonperforming loan repayments, and changes in thestatistical treatment of a signature bonus for the exploration of hydrocarbons. The structural budget surplus is set to decline over the forecast period from 1½% of GDP in 2019 to ½% in 2020, mainly reflecting the large positive output gap.

Risks to the fiscal outlook however are on the downside. Key risks include the court cases that could lead to the reversal of civil service pay cuts implemented during the crisis as well as the potential deficit of public healthcare providers during the first years of the NHIS. The potential realization of contingent liabilities remains a major risk to public finances. Positive cash balances from the resulting Cyprus Cooperative Bank (CCB) entities constitute an upside risk.

Following a significant increase in government debt in 2018, due to the one-off government support to the banking sector, the debt-to-GDP ratio is projected to fall to 93.8% in 2019, to 87.8% in 2020 and to 81.8% in 2021. The decrease is mainly due to projected primary budget surpluses, strong GDP growth and active debt management. Cyprus repaid in advance the Russian loan in September 2019 and plans to repay early the IMF loan in 2020.